The After Beat - Hope & Cocktale DJ

The initial idea behind The After Beat began in 2016 and was started by Cocktale DJ when he started doing house mixes and uploading them on YouTube as a way to create a name for himself as a DJ and producer.  Things took a turn when Cocktale DJ met Hope Thobs at UJFM in 2018. Upon general discussions, about music, they realised that they shared a love for house music and were both passionate about making an impact within house music culture.

Just as the initial plan of the podcast was just about music, and nothing else, the name The After Beat was only fitting.  Unlike other brands, The After Beat exclusively focuses on music (the beat). The need to focus purely on the beat came after the realisation that some interviewers choose to focus on the private lives of musicians, which overshadows their talent. Therefore, as The After Beat, the duo is changing that narrative to make room for interviews that have zero controversies and focus on the talent of the musician.

Debating about who has dropped the hottest house song is what Hope Thobs and Cocktale DJ enjoy.  This is why The after beat intends on shinning a light on house music producers, vocalists, DJs and the overall art of house music. After all, the producers of house music deserve as much attention as other artists.  Fast forward to the year 2021, they wanted to start a movement and the only way to do so was through a house music blog and podcast.  Whilst Cocktale DJ brings his production skills to the table, Hope Thobs brings his presenting and writing skills and The After Beat was born.

Having completed two seasons of 10 episodes each, profiling and covering the hottest local and international house music producers, DJs and Vocalists.  Season 3 will be broadcast exclusively on Drums radio and from here on, the team is planning a nationwide tour, featuring all the artists covered. 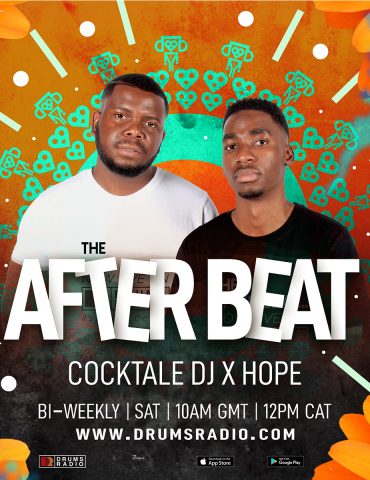 The After Beat RELOADED